The tower is part of the village’s medieval system of defence comprised of fortified walls and defensive towers.

The footprint of the tower is square, and in the north and east elevations arrow slits are still visible, an elegant protruding structure composed of corbels supporting an overhang. In the spaces between the corbels are openings through which liquids or weights could be dropped onto the enemy.

The front features a clock with ‘Italian hours’, the face divided into six hours with a single hand that went round four times a day and indicated the hours on the basis of six instead of twelve. 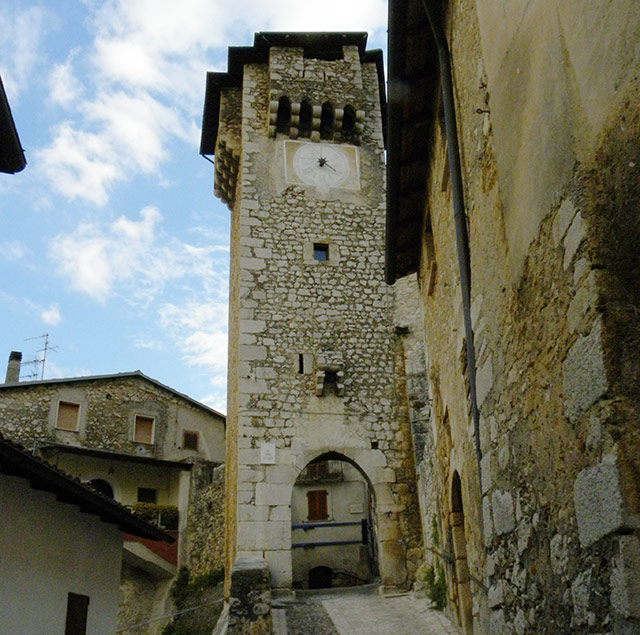 The mechanism of the clock can be visited, entering the tower through “Lo Spazio della memoria” (The Memorial Space): to the side of the tower, in the so-called “corpo di guardia” (guardhouse), a photographic exhibition has been set up of works by Roberto Grillo with photographs of L’Aquila, old photos of Fontecchio and a memorial of the earthquake of 6th April 2009.

In this space one can also see an ancient stone vat for treading grapes still with evidence of the (now missing) beam winepress; Roman artifacts found in the Church of Santa Maria della Vittoria (previously Temple to Jupiter) and other medieval bas-reliefs including one with Calvary, a chalice and the “serpent of knowledge” attributed to the Knights Templar and another with a dragon swallowing a man.

Below the tower is the Porta dei Santi, (Gateway of the Saints). A pointed, gothic arch built from large square stone blocks, it forms the main entrance to the historic centre of Fontecchio. To the right of the gateway, from outside, can be seen the remains of an embrasure, dating from the end of the fifteenth century, at eye level to “sweep” the attackers who had passed the boundary of the outer walls.

Beneath the arch you can see traces of a fresco of the Madonna and Child.